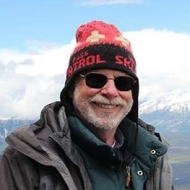 This user has not added any information to their profile yet.

In 1961, while looking for treasures in an Early Winters camp ground, Kit found a pocket knife. He took it home and started carving sticks and left over building materials; building birds and figurines. Wood carving was one of his first merit badges in Scouts.

By the time he was in college and working to support himself during the summers, he was carving up wood samples in the Oregon State Forestry School (which was a no-no, these samples were supposed to last years) and making balls in boxes while waiting between logging turns in the foot deep tamarack dust of eastern Oregon.

Finding permanent work as a forester in an economic recession, Kit started a 33 year with the State of Washington where he was surrounded by wood. Through that time, he had gone through a dozen pocket knives (by losing them) and continued to work on pocket knife sized wood. But now, he was surrounded by interesting woods in abundance; he acquired yellow and red cedar chunks off of logging landings; he found big leafed maple, Sitka spruce and Douglas fir pieces in Scout camps. During all this time, he probably made two dozen carvings; none bigger than a duck and most about the size of robin.

Retirement in 2007 lead to experimentation; Kit had met a couple of carvers who made decoys and art for the Puyallup fair. They introduced him to angle grinders and other means of moving a lot more wood than a knife allows. He had originally envisioned a coffee kiosk sized wood carving shed but their education made him reconsider and Kit ended up with a two story 20x24 shop.

Now Kit makes between 10 and 30 carvings a year, depending upon their complexity and whatever else is going on (such as visiting grandkids). He seldom just whittles now but he is not a production sculptor either. Most of his carvings are in the round and most of them are not from properly cut and dried cants. Kit occasionally does contract work but seldom; it has to be something he wants to make.

Kit’s inspired by what he sees in life or photos (the movement of a sea lioness, the steadiness of albatrosses in mighty winds, the sleekness and versatility of an octopus…) by the grain of wood, the movement of the growth rings, the coloration and intrigue of hues; by the serendipitous creation of movement found in the carving process; by the feeling of the blades cutting the wood; by the enhancement of the carving by the bold use of one, two or three colours as developed and perfected by NW peoples; and, by the addition of shell, metal and paint to create or enhance movement and suggest stories…

Images of artwork below. Inquire for prices.

"I Missed It": Apple, cherry and cedar frigate bird

"Back Off": Yew kestrel rattle

BACK TO MEMBERS PAGE